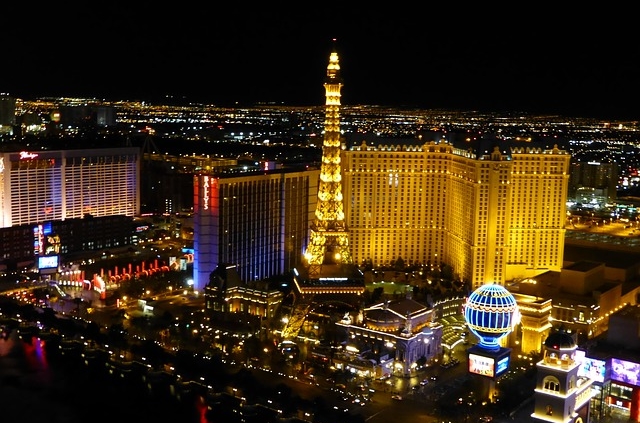 Las Vegas is one of the most welcoming cities in the world, offering real estate options in a wide variety of price ranges. Often cited as the “Entertainment Capital of The World,” Las Vegas can be a surprisingly beautiful and peaceful location despite the common stereotypes you might hear. And let’s not forget the very low crime rates!

That’s right, peace and quiet. Las Vegas is actually mostly like living in the suburbs of any other city, apart from when you take a stroll down the strip, which is where you will find the quint-essential, neon-soaked Las Vegas experience.

But, other than that, all the best neighborhoods in Las Vegas are the very definition of the suburbs. On top of this, the vast majority of neighborhoods are safe and boast relatively low crime rates compared to other areas in the nation.

As for the weather, It tends to get pretty hot in the summer (as you might expect), with temperatures sometimes going over 100°F (38°C), while the winter months get as low as 38°F (3°C). However, most commercial property management Las Vegas agents will recommend that you get a house with a pool, so you can kick back, relax, and enjoy the scenery.

The thing is, the best Las Vegas neighborhoods are not necessarily the most expensive (depending on your taste and budget). You will also need to check Nevada property records to confirm that you are up to date on any deed, title, and tax information. The median house price tends to fluctuate around $300,000, which is pretty reasonable considering you’d be living near stars such as Nicolas Cage, Celine Dion, Floyd Mayweather, and Mike Tyson. With that said, let’s go over the six neighborhoods we deemed as the best places to live in Las Vegas.

The Centennial Hills is located in the north-western part of the city and is considered to be one of the best Las Vegas neighborhoods for various reasons. Firstly, the real estate prices here start as low as around $120K for a two-bedroom house, but they go up to nearly $2M. Currently, the neighborhood has several schools; it boasts well-kept yards, is pet friendly, has easy parking, and has a chilled vibe.

According to the residents, there are a lot of respectful families living there, it’s not overly crowded with shopping centers, and there is some nightlife for those who want to seek it. However, it’s more renowned for having an easy-going spirit. It is great for walking or running since there isn’t too much traffic, which is great for families with young children too.

Additionally, there are also gyms, arts & entertainment venues, cafés, and restaurants to try out.

According to the latest FBI released data, the crime rate for 2019 was 93% higher than the national average. Translated to daily life, a single Centennial Hills resident has a 1 in 21 chance of being a crime victim in a year, so that’s once every 21 years on average, which is quite low.

Green Valley South is located in the south-eastern corner of Las Vegas, diametrically opposite Centennial Hills, in Henderson. And, it also has a dense suburban vibe, with most homes owned by their residents. It has a population of around 30k, and a median home is valued at around $300K here.

The public schools here are considered above average, and the neighborhood also has shops, restaurants, cafés, and parks. The crime rate here is 29% under the national average, with violent crimes being 68% lower and decreasing!

A Green Valley South resident has a 1 in 57 chance to be a crime victim in a year, meaning once every 57 years on average. This neighborhood is one of the safest places in Nevada, and many sources confirm property management laws are of the highest standard.

Rancho Charleston has some of the lowest real estate prices in the entire area. Prices for houses go as low as $90K, but they also go up to over $3,5M. The rent can also be quite reasonable, as low as $300 but ranging to up to $7K. As far as diversity goes, this is the place to be.

This neighborhood is located at the very center of Las Vegas, but it also keeps much of the suburban feel. Because it is close to everything, it is a popular choice for professionals. Here you can do anything Las Vegas offers, like shopping, gambling, going on a tour of the late Michael Jackson’s house (the Thriller Villa), and much more.

However, with the area being more centrally located, it also has a slightly higher crime rate, with Rancho Charleston’s rates being almost 500% over the national average. Here, a single person has a 1 in 7 chance to become a crime victim yearly. The neighborhood has around 36k residents, over 13K homes, and it is still one of the best places to live in Las Vegas.

As far as community goes, Summerlin is the best there is. It is an area positioned perfectly on the western edge of the city, partially within the city limits and partially within Clark County. It spans more than 22,500 acres of land, most of it parks (230 parks currently), and also a population of around 46k.

However, living in such a premium location has its cost. The average price for a median home is just shy of $400k, while they go up to $19.5M! It has public and private schools, resort hotels, recreational facilities, shops, entertainment centers, and everything one might need for nice city life.

The Money magazine counted Summerlin in their “Best Places to Live in America” list in 2014, and the National Geographic Adventure proclaimed it the “#1 best place to live and play” in 2007. Crime rates are also some of the lowest we’ve seen, at 51% lower than the average rate nationwide and a 1 in 83 chance for a resident to be a crime victim yearly.

Whitney Ranch is one of the best neighborhoods in Las Vegas to settle down in. It is located in the Henderson area, in the south-east, and has a population of around 39k currently. Home prices range from $200K to over $600K, which is in the affordable spectrum, and average rent is a little over $1.2K.

Compared to the national average, this is has a 300% higher crime rate, where a citizen has a 1 in 11 chance to become a crime victim per year, but the rate is decreasing. There are several schools, shopping centers, restaurants, and things to do with your family, while there is still some nightlife to be enjoyed there too.

The City of Henderson

The City of Henderson includes the aforementioned Green Valley South and North, and Whitney Ranch neighborhoods, but also several others like the Macdonald Ranch, Seven Hills, Gibson Springs, and more. It is located 26km (16miles) south-east of Las Vegas Valley and has a population of around 320,000, according to the latest census info.

The city includes Lake Las Vegas to the north-east, which is home to cool country clubs, and there are 62 parks and many trails to enjoy all around Henderson. Most areas of the city are well connected, and people claim you can get to anywhere in the city in 45 minutes max.

It still keeps the suburban feel, and it is safer than any safe neighborhoods in Las Vegas. It was the safest city in America ranked by Forbes in 2018 and 2019, and it has a separate police force from Las Vegas. There are plenty of opportunities for a vibrant social life in the City of Hendeson, from community events to entertainment and culture. It would certainly be a great place for you to call home.

What Is a Commercial Property Insurance?
Scroll to top